A love letter to wind turbines

I can see several of the wind turbines in the Hoosac Wind project from my desk chair at home.  My two year old son and I see them every day as we drive to and from day care, and we talk about how they look and whether they’re turning.  One afternoon in the darkest time of the year, the turbines caught the alpine glow just as the sun was setting and we were driving past.  The blades were a bright illuminated pink against the grey sky, and I caught my breath at how beautiful they were.  I love watching how the ever-changing wind and light make the turbines look entirely different.

For that matter, I love solar panels, solar thermal collectors, and any kind of clean energy generation.  I find them visually appealing, but I love them for what they mean to me as well.  I come from coal mining country in western Pennsylvania, and I know first hand about the alternatives to those turbines, panels, and collectors.

My brother and I grew up in Pennsylvania where parts of my family have lived for hundreds of years. We ran wild through the forest and played in the springhouse that my great-great grandfather built.  The daffodils that my great-great grandmother planted survived for years after the nearby house decayed in to a tumbled rock foundation.  I was amazed when I first discovered them growing in the deep shade of the regrown forest.  My grandfather told us that giants had lived on our land once upon a time, and that the boulders all around were there because the giants had thrown them down the hill in a game.  We believed him – there was a magic to the place.

There were also hints and reminders of the human history of the place.  The older ways of making a living off the land left marks that grew dim.  All that was left of the old quarry were the moss covered pile of regularly shaped pieces of rock and the faint path down to the river.  The overgrown orchard, grape vines and the tumbled foundation were all that were left of the old farm, and some bits and pieces of the old sawmill remained in my grandfather’s workshop.

The more recent scars were much more visible.  Years before I was born, my great-grandfather sold the rights to the coal under part of the family land.  At that point, there were no regulations about how the land should be left after strip mining, so the old spoil piles remained.  Acid runoff from that old mine colored some of the creeks and streams a bright orange-red.  Our white, shaggy dog would sometimes return from his wanderings with his underbelly dyed that bright orange.

We lived right next to the house my grandparents built for their retirement. To pay for it, my grandfather sold the rights to mine the coal on the rest of our land.  He laughed that he’d gotten the better of the deal, that nobody would ever bother, that unlike the part that his father had sold, the coal under the rest was too far down, and too dirty.

When I was fourteen, someone decided that our coal was worth digging.   The power plants were always hungry, and the easier, cleaner coal in the area had already been mined and burned.

They stripped away the trees, the topsoil, the old foundations, paths, and roads.  They used dynamite to blast away the bedrock that was the backbone of our hill.  Where our spring had been, there was only a gaping hole.  The land where my family had eked out a living for generations became uninhabitable – without water, there can be no livelihood.

I couldn’t stop the bulldozers, so instead I argued (I was fourteen, after all). With my brother who didn’t like the mining either, but who told me that if I didn’t want mines to happen, I should go live in a cave without electric lights and television.  With my father who asked if I would still want to stop the mining if the money that my grandfather was making was mine instead. I said that I would want the trees and the spring – not that it mattered, since it wasn’t my choice to make.

Twenty odd years later, I see the complexities and the trade-offs and the complicated political dance around energy generation.  I truly sympathize with the desire to keep green space and to protect natural areas.  But I feel a deep frustration with the fact that most people never see or really understand the alternatives.  Too often, the choice appears to be between wind turbines (or solar panels) and keeping our green spaces untouched.  But in reality the choice is between turbines here or strip mining elsewhere, between solar panels where we can see them and fracking or oil drilling where we can’t.  I love the mountains and fields of my adopted home, but the ridges and hollows of Pennsylvania are (or were) every bit as beautiful and magical and loved.  The burden of looking at wind turbines and solar panels can’t be compared to the irreparable damage that’s being done elsewhere.  Think a bit before talking about “destroyed views” and “ruined mountains.” 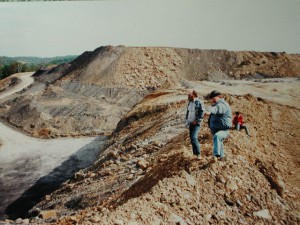 The destruction goes far and wide, beyond the blasted mountain, the lost spring, and the land ruined for human living.  About 100,000 tons of coal were removed from our land, taken to the nearby coal fired power plants.  Over 200,000 metric tonnes of greenhouse gases were released when that coal was burned (for reference, Williams’ entire emissions for the past year were around 20,000 metric tonnes).  I remember my grandfather parroting the typical discussion about pollution at the time – “The solution to pollution is dilution.”  Ever taller smokestacks were built for the power plants, so that the acid rain that resulted from burning high-sulfur coal would fall somewhere else.  That acid rain probably fell in New England – there is no “away” after all.

Energy conservation is doubtless a huge part of the solution, but my brother had a point when he told me to live without electricity if I didn’t like the mining on our land.  There’s no way to reduce energy use to zero while keeping things like refrigerators, air conditioning, artificial lights, computers, iPads…. Refusing to host renewable energy generation in our area doesn’t make the energy generation problem go away, it just guarantees that the very real costs are born by other communities – generally communities of color and poor communities which lack the resources to resist or the political power to be heard.

When I see the wind turbines out my window, or on my walk or my daily commute, I see our towns and communities taking responsibility for our energy, instead of leaving the problem for some other community.  I see hope that we might actually be able to change the way we approach energy.  I see a better future  – and that’s a beautiful thing.