You can create less waste by reusing things a second or third time. Or you can donate items you no longer want or need so that someone else can continue using them. Once a thing or a product exists, the sum total of all the energy that it took to produce that item can be considered to still be with it as “embodied energy.” By choosing to reuse or repurpose items, you are conserving all of the energy it will take to produce and get another item to you.

It is particularly important to reuse items that you use often.  For instance, bringing a reusable coffee mug or a reusable water bottle with you means that each time you would use a disposable one, you don’t.  Even though the energy in one plastic water bottle or one disposable coffee cup seems small, when that is one per day over the course of the year, it adds up!  When a student arrives at Williams they are provided with a reusable stainless steel water bottle.  New Faculty and Staff are often also offered this as part of their training program.  Many initiatives have been promoted in order to encourage students to bring their own mug.

What initiatives has the College pursued?

Leading sustainable building certification programs – like LEED and Living Building Challenge – encourage the reuse of materials. Cement from demolished buildings can be ground up to be used for gravel fill for buildings or parking lots. Wall boards can be reused for tables. We reclaimed Vermont slate used in a building that was set to be demolished and used it in a different building. We also sometimes move and reuse buildings.

What can students do every day?

Many items can live a good second life by performing functional or aesthetic duties. Reuse options can be incredibly basic to incredibly elaborate. You could spend days spinning through countless Pinterest pages, including this “Upcycle & Repurpose Ideas” page.

Have a suggestion about a good way to reuse something?  Tell us about it and upload a photo if you have one.  We’ll add it to the list. 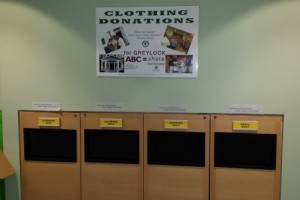 Through donations, others can make use of things that you no longer want or use.

Where to drop off donations