October 2018 Update to Shane Beard’s blogpost below:  the Lehman project has been put on hold.

Lehman Hall is one of the first dormitories at Williams to be renovated under new building standards. These new standards are in the pilot phase, and may manifest in one of two 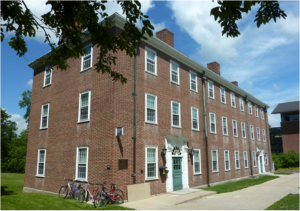 ways; LEED version 4, or a combination that incorporates elements of the Living Building Challenge and Passive House certifications. No matter which standard is chosen during the design process, the goal is to challenge EUI targets [EUI stands for energy use intensity, or a building’s energy use as a function of its size or characteristics], reduce embodied carbon, and to pilot a new standard for Williams buildings that prioritizes sustainability and accessibility. In the month of July, a handful of the Zilkha interns (Shane Beard ‘20, Jamal Meneide ‘19, David Julio Tavarez ‘19, and Evan Chester ‘21) joined meetings about the preliminary plans for Lehman, set to begin construction in September 2019, and talked about the commitments and opportunities for the Lehman project with its designers.

The first meeting, which took place on July 19th, focused on the “program” for the new and improved Lehman Hall. Of the many goals that the college is targeting – maintaining the bed count and building footprint, improving circulation, using space efficiently – creating a living space that is sustainable and attractive was a prominent stance of the designers. The new Lehman Hall will refresh and preserve its exterior look, while also altering the inside almost entirely to improve quality of life and energy efficiency. For example, it’s been proposed that Lehman will keep its two prominent front doors, but only the one on the east side of the building will actually function as an entrance that can be opened from the outside. The west door will be sealed, which will help keep the building insulated and prioritize one entrance into the space, with hopes that this change will strengthen the communal vibe of the dorm. In terms of accessibility, an elevator would be just inside the main entrance, and all bathrooms would have handicap accessible showers and toilets. 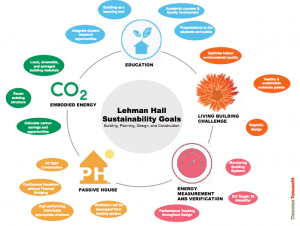 In terms of building materials, the renovated Lehman Hall would look to the LEED Materials section and the Materials Petal of the Living Building Challenge as a base. This includes replacing the brick and terra cotta of the original’s Interior walls with brick and wood panel studs with insulation. This increases the R-value (resistance to heat flow through a given material) of insulation, and makes the building airtight, thus reducing the energy lost by heat entering/escaping the building. Adding more beds would also go a long way to reducing the energy footprint of the building, although the final bed count is dependent on how new plumbing fixtures work into the final floor plan.

Internally, the number of beds is likely to be roughly the same, with 1 or 2 beds likely being added to the total. Instead of mostly being singles, many rooms will become doubles. This move will alter the interior space greatly, which may be a point of contention- Lehman’s singles have always been one of its primary draws. That being said, doubles are far more sustainable. From a student run study of on-campus energy reduction policies from 2016: “Single rooms are inherently more energy intensive than rooms shared with multiple students. Sharing a room allows the college to provide heating and lighting for two students simultaneously in a shared space, as opposed to providing the same services in two separate spaces.” Doubles reduce energy use and cut emissions, so the board of trustees is asking the college and designers that work with the College’s Planning Design & Construction team to consider doubles.

Seemingly to make up for this, the designers highlighted their plans for larger, beautiful common space in the building. This manifests in two adjacent locations: the North Lawn behind Lehman, and a new common space in the middle of the dorm. This proposed space would be double height, and would take up the first two floors. It would be a fully furnished common room, with its north side having large windows that look out onto the North Lawn. To further emphasize the North Lawn, the improved basement will have more natural light and an exit to a terrace on the lawn. 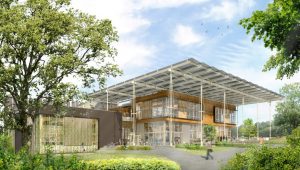 The second meeting students were involved in was all about making Lehman a more equitable space, and that’s when I began to ponder how Lehman will be perceived post renovation by students and the wider community. The idea behind the Equity petal of the LBC, which the renovated dorm is aiming for, is to balance “people, building, and community.” Georgia Tech’s LBC compliant Kendeda Building and it’s Equity Working Group, which incorporated faculty, students, and the neighboring community into the discussion for the new building, was held up as a successful model of an equitable building process. The group prioritizes local hiring, a welcoming building culture, building safe pathways to neighboring communities, and formally engaging hourly staff in student development and education work. These are all admirable goals, but two factors make the comparison unfit for the Lehman renovation.

Unlike the Kendeda building, or our own Environmental Center, Lehman is a dormitory, and its day to day function entails some sense of privacy, since students will live, sleep, bathe, and study in that space. Opening avenues for all community members to feel welcome on campus, and boosting engagement for staff on campus needs to happen, but perhaps not through this building. Second, the nature of Williams campus makes Lehman’s location on campus very distinct from neighboring communities. North Adams and Pittsfield aren’t in walking distance, and other dorms (Mission, Dodd Circle) are closer to central community spaces in Williamstown, like Williamstown Elementary. To that end, focusing on building equity on campus as a whole, and in Lehman’s relationship to the rest of campus, is more plausible, and steps to do so can begin before renovations even begin.

Lehman’s location is a considerable factor to consider when it comes to its relationship to the rest of campus. Unlike most other dorms on campus, Lehman isn’t a part of a quad or neighboring any other dorms. It’s technically a part of the Dodd neighborhood according to the Neighborhood Leadership team, but the building itself is directly behind Hollander, and is uphill from the set of dorms it’s ostensibly connected to. This placement makes Lehman uniquely isolated and self contained, despite its presence in the center of campus. As the design process proceeds, envisioning Lehman as a unique space on campus would only work to its benefit. Incorporating biophilic design into an open performance space on the North Lawn, planting a new community garden, or investigating how the renovated dorm could function as a pilot for affinity housing would all be steps towards making Lehman’s location a strength for the community as a whole. After all, making a Lehman that is as sustainable, accessible, and inclusive as possible is another step towards a better Williams, and an ongoing, open conversation is key to that.

Watch this space for more on the Lehman design project as it develops.  If you have thoughts you would like to share about the built environment at Williams or Lehman Hall in particular, email us  so we can bring it with us to the conversation.