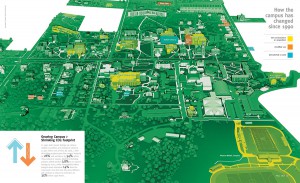 The helicopter swung low over the hills on a crisp November evening, veering over the top of Lasell Gymnasium on its way to trace a path across campus. Suspended beneath it, an infrared camera took images of each building as it passed. Looking at the rainbow-colored images later, facilities management executive director Bob Wright saw confirmation of what he’d long suspected. The Log—which began as an alumni watering hole in the 1940s and played host to generations of open mikes, luncheon symposia and late-night foosball games ever since—was a veritable heat sieve.

Outmoded construction and years of deferred maintenance riddled the building with drafts. No matter how Williamstown winters raged, it was the only building on campus without snow on the roof. “The Log was an energy disaster,” says Wright. “It had a cupola on top where the heat went right up into the air.”

This year, the facilities team gave the building a long-overdue makeover. In addition to fixing structural problems, they turned the Log from an environmental disaster into an exemplar.

Keep reading this article from the Williams Magazine