This summer I’ve been working on eight oil paintings focused on other current students from Williams College, particularly the others participating in the same Zilkha Center internship during the summer. I wanted to get to have better insight on what environment means to different people, whether it be natural surroundings, the neighborhood one grew up in, or the people that make up a home. I interviewed each of the eight subjects about where they have lived, what’s important to them, and what’s made them feel at home in each of the environments they have occupied. Additionally, the paintings were created with water-soluble oil paints in an effort to prove that paintings made with more environmentally friendly methods could still be of the same quality. These efforts, combined with research done throughout my time at the internship all went into a report on how to make more sustainable painting classes. 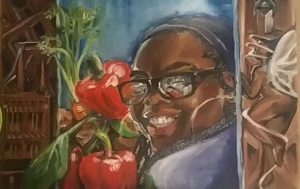 “I feel like it’s natural for kids to feel protective over animals and over the environment, I feel like that’s where we all start off.”

A lot of my conversation with Shalya centered around the magical aspects throughout their life, whether in the fantasy novels and TV they grew up on or the quiet peace of their porch. Shalya also found magic in sustainable farming in their internship at Soul Fire Farm:

“I liked how hard it was and the whole experience was really good for me getting out of the whole romanization of the farming lifestyle. It’s really hard work but I loved it! Vina talked about how both Port Harcourt and Houston nurtured different parts of her. While Port Harcourt brought up memories of fruit trees, farming,  and growing up with nature, Houston’s environment was critical to her identity and development through historical fiction novels, school, and classical music.

“Houston was a place where I discovered a lot about who I am like the books I loved reading and where I first heard classical music and I was like ohmygod I have to do this I have to be an instrumentalist.” 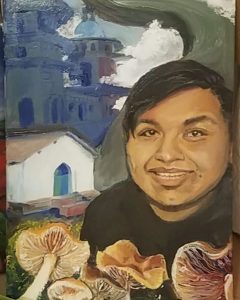 Lito and I talked a lot about his childhood in Puebla, which meant spending a lot of time outside. We spoke a lot about the two local churches in his town, one which his family and community was still in the process of building while he lived there and is still a part of his town he feels connected to.

“I think I’ve been very lucky to see two different environments in my life, having lived in Mexico and having lived in California to kinda shape my perspective on life. It makes me do double takes on things a lot of the time” 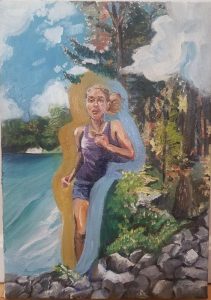 Maria spoke about falling in love with the New England outdoors doing on the cross-country trails in high school. This was followed up by a fondness for environmentalism fostered by a teacher, a Williams alumna, and a high school trip to Costa Rica to learn about their sustainability initiatives.

“I really consider myself a New Englander … I love the cold and snow and growing up in Florida I went to the beach like almost every single day I loved the ocean so much. I still love the beach a lot but not as much as I love the mountains and the outdoors up here.” We talked a lot about Hugo’s garden, which he works on and watches over from his porch. He also spoke about spending time on the trail near his house and  in his basement with his instruments.

“There are these pictures of me, this tiny little kid with these plants in my backyard. I know my grandparents are really into it and I think I spent some time there when I was a kid and I just find [gardening] to be so satisfying” 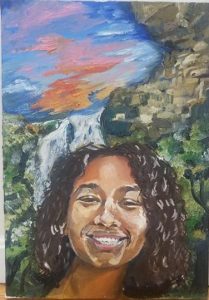 Haley’s time in quarantine these last couple of months has brought her back to her hobbies from when she was younger, from setting a goal to read 10 books a month, to spending time appreciating the outdoors. Visits to family, spending time with her twin sister and friend at a nearby park, and running cross country in high school fueled her love for the outdoors, particularly sunsets, sunrises, and waterfalls.

“I’m a sucker for the sunrise and sunsets so I will stay up late or rise early to see it and I really enjoy those quiet, calming, peaceful moments in nature and I feel like I have rediscovered a love for the outdoors.” My conversation with Aniah centered on growing up near Atlanta and how her dynamic with the city shaped her interests. She talked about picking up photography in high school and how that was in part due to the social capital that came with making art. Now she is hoping to explore other deep seated interests that she had previously accessed through her love of reading as a young girl.

“It had a lot to do with the culture of Atlanta as a city. I feel like right now there is a huge resurgence of honoring creativity and Black creativity in all forms and so in high it was kinda cool if you were a photographer” Ken spoke about living in different places throughout his life. He spoke particularly about his old neighborhood in Japan and his time in Wales. His old neighborhood is filled with familiar places and connections and he talked about his memories of soccer, studying, his elderly neighbor, and how he still considers it home. But he also spoke about the bonds forged at boarding school and his work on a sheep farm, tending for the environment.

“I feel like each of the places I’ve lived in has done good things for me in different ways.”

See our Covid-19 website for strict health and safety protocols for those who remain on campus. All Williams College buildings are closed to the public and visitors until further notice.