Shoveling Shindig: How Waste from the Composting Toilets Turns Into Soil

Thump, thump, thump. I, along with my Waste and Value class, empty bin after bin of dark compost into a shallow trench dug in the meadow about 100 yards off the road leading to Tyler Annex. The soil appears rich, filled with nutrients, red worms, and helpful fungi. Odorless and void of harmful bacteria, the organic matter is the last thing you would expect to come from the Class of 1966 Environmental Center’s two composting toilets. 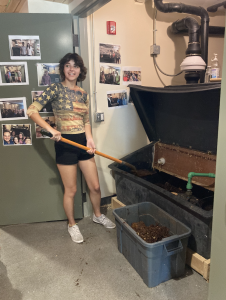 Last Wednesday, my class had the opportunity to assist Clivus New England Field Service Worker Geoff Goodhue as he performed his yearly emptying of the composting toilet.

Requiring a two-flush process, the toilet relies on a concentrated alcohol-based foam containing only 3.5 oz of water per flush, 34x less than a conventional toilet. A fan pulls air down through the toilet, maintaining negative pressure on the system and preventing odor in the bathrooms. The system siphons off the urine, which is illegal to land-apply in Massachusetts unless through an approved greywater system, into a separate storage container that gets emptied about twice a year. The solid waste is transferred directly into the compost chamber, located in a locked closet off of the hallway in the lower level of the Class of 1966 Environmental Center. 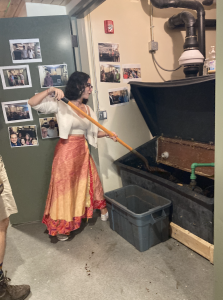 Kept in dry conditions of 65 to 113°F, the waste then undergoes a series of complex biological transformations aided by sawdust, red worms, and mesophilic (cold-system) bacteria. The system eventually creates a product of 95% carbon dioxide and 5% compost. Thankfully, this is carbon-neutral since the CO2 was sequestered by plants before being turned into food for humans. The compost is land-applied (or just “buried”) in various areas of the campus away from food producing plants.

My Waste and Value class, taught by Professor Joel Lee, explores waste systems out of Williams College, including anything from recycling to human waste. In our research on the topic, we have explored different ways stigma affects waste disposal, especially that surrounding human excrement. The concept of turning waste into fertilizer is not new. Producing produce that was in high demand from many restaurants, sewage gardens existed around Paris from the early 1870’s until they eventually declined by the late 1940’s. Yet, there is still a slight element of disgust associated with the organic matter. Goodhue reflected on how he used to not tell people exactly what his job was, preferring to simply state “the sustainability sector.” However, stigma appears to be shifting. Now, he almost always tells the truth about his job. 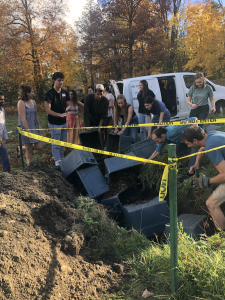 Composting toilets are an exciting solution to the issue of disposing of human waste. I encourage you to try the homework my professor assigned for my Waste and Value class: use the Zilkha Center’s composting toilet!

For more information check out the Composting Toilet FAQ’s.