This past May a composting program was piloted in selected residence halls.

There has been increased interest in composting among students in recent years.  Dining halls all have post-consumer compost and are in the process of getting all the dining halls to have pre-consumer composting as well.  In the last year, Dining shifted all of their to-go ware (plates, silverware, coffee cups, straws, etc) to compostable items. However, there were no compost bins outside of eating establishments (dining halls – including the recent addition of Eco Café and Goodrich Coffee Bar).

After seeing the results of Abby Rampone’s ’17 research project about students interest in expanding composting outside of Dining Halls, the time seemed right for piloting compost bins in residence halls.  Dodd House and Poker Flats were selected as good places to start because of their well-used kitchens and because those residences worked well operationally for our compost hauler – T.A.M. – to pick up the bins.

What can go in the compost bins? 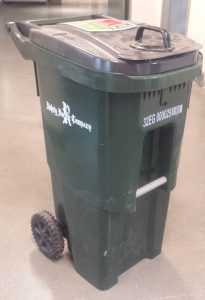 Outreach about the program

Education about how to use:

For Dodd, the compost bin (see photo) was kept in the student kitchen.  Thursday mornings the custodian moved it out in front of Dodd where it was be picked up by T.A.M. that morning.  We made it clear that the bin was for everyone  – not just students cooking in the kitchen.  Students were encouraged to bring food scraps down from their rooms rather than throwing them in the trash. 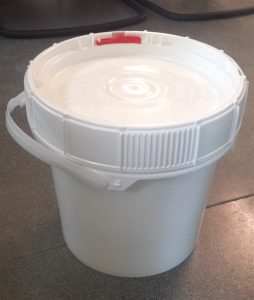 For Poker Flats, there was a 4 gallon buckets with screw-top sealable lids (see photo) was put in the kitchens and can be used on a daily basis.  The custodian took the smaller compost bucket out twice a week to the compost bin, which was be kept in the outdoor trash/recycling closets.

We sent a google form survey to students in both Dodd and Poker through their NLT.  We received 22 responses and they were overwhelmingly positive.  86% of respondents said they are glad that composting was an option in those two residence halls

80% of respondents said that they would like to see composting increased to other dorms.  Suggestions included Morgan, Prospect, and co-ops.

We learned that signage still needs to be improved

And two people mentioned that the bins became too smelly.

Facilities informed us that only one or two of the Poker Flat buckets were regularly used and that there wasn’t much compost collected in the Dodd bin.

Overall this was seen as a positive program on the student side and one potentially worth continuing and expanding.  However, student participation wasn’t particularly high in these two locations.  It would be worthwhile to conduct another, more comprehensive pilot program, perhaps in different resident halls.  Facilities and the Zilkha Center should work with T.A.M. to improve the system, which would likely include more frequent pick-ups to decrease the smell.  Increased operational costs will need to be planned for.

Click here to open the report in a new window

See our Covid-19 website for strict health and safety protocols for those who remain on campus. All Williams College buildings are closed to the public and visitors until further notice.