Erica Chang ‘18 had always been interested in the ocean, but studying away at Williams-Mystic in spring 2016 gave her a real taste for it. When she traveled to the Pacific northwest with the program, she discovered an interest in salmon, fisheries, and our country’s relationship with seafood. It’s ironic, she said: as a vegetarian, she doesn’t eat seafood herself. But after her return to Williams, she missed studying the ocean. “We don’t have many classes focused on the ocean,” she said. “Many of our classes are place-based, which makes sense, but we’re still connected to the ocean.”

We’ve come a long way with our food; students have spearheaded a 50-percent industrial beef reduction and a fair-trade banana implementation, and the campus celebrates local products and “150-mile” meals. But considering we spent nearly $200,000 on seafood during the 2016 fiscal year, talking about where our seafood is from and how it’s caught is an integral part of sustainability discussions.

This semester, Chang designed an independent study to examine seafood in the dining halls. Her goal was to learn about how Williams could purchase more local and sustainable seafood in order to “both heal our marine environments and support local companies and coastal communities.” Professor Mea Cook and Zilkha Center Assistant Director Mike Evans have acted as her advisors, and she says that survey skills learned in Professor Sarah Gardner’s Environmental Planning class also proved invaluable.

Chang began with a current purchase assessment of the fish currently served at Williams, using a spreadsheet of product quantities provided by Dining Services. This proved surprisingly difficult, she said. “There’s very little transparency,” she told me. “We buy fish from places like Sysco, Ginsberg’s Foods, and Black River Produce, which are suppliers, not producers. Often, the supplier reps can’t even tell you where a specific fish comes from. That means that you have to go one step deeper.”

Chang was able to trace the tuna served at Williams, which Dining Services purchases through Sysco. Sysco’s canned tuna (both yellow fin and albacore), which they purchase from other companies, comes from Thailand and Indonesia. And according to Chang, fishery management isn’t usually as stringent in Southeast Asia as it is in the U.S. As for other fish served at Williams, Chang was able to make educated guesses: Wild salmon likely comes from Alaska, students probably eat some farmed Atlantic salmon, and our cod is likely brought in from the west coast.

Our lack of local seafood is a vicious cycle, Chang told me: The U.S. imports seafood that customers demand, but it also exports substantial quantities of seafood. There’s a disconnect between local seafood and consumers, which Chang attributes to consumer habits and marketing. For example, though the U.S. exports dogfish in huge quantities, the fish has never achieved much popularity in the U.S. Certain fish have entered our diets – and not others. “People like what’s familiar,” Chang said. “If something new is available, you’ll neglect it in favor of what you’re used to eating.”

The fishing industry plays a large part in directing American consumers to certain fish. In the early 1900s, for instance, halibut were ranked and labeled as either “gray” or “white” halibut. Though these categories were arbitrary, they made some types of fish sound fancier than others.

The lack of transparency that Chang encountered is also a central issue. “Lots of fish that the U.S. imports isn’t inspected at all,” she said. “Things are mislabeled all the time, so we have to ask, is this really the tuna we think it is? Or is it really ‘pole and line’?” Lack of transparency also masks human rights abuses in the fishing industry; Chang cited a 2015 New York Times piece about slave labor on Thai fishing vessels.

To increase local, ethical, and sustainable seafood purchasing at Williams, Chang knew that she had to get the student body on board. She created and distributed a “Sustainable Seafood” survey in late April to ask students about their preferred types of seafood, seafood preparation methods, and their willingness to try unfamiliar fish. Results indicated that students overwhelmingly say that they’re willing to try new types of seafood and that they don’t need a huge incentive to do so.

Chang’s next step was to collaborate with a local supplier, Red’s Best, to bring a seafood tasting to campus. She’s especially interested in underutilized whitefish species that can be caught locally, and the Boston-based Red’s Best offers an array of these options. Red’s Best calls itself a “seafood wholesaler that aggregates from small, community-based fishing boats.” Its website points out that “you probably know your accountant and your plumber, but you probably don’t know your fisherman although they feed you.” This ethos embodies the value that Chang places on local, sustainable seafood.

On Thursday, April 20, Red’s Best set up a seafood tasting in Baxter Hall with two options: Acadian redfish and scup. The dining halls themselves served dogfish that day. The Red’s Best table displayed samples alongside informational posters and whole fish on ice, which gave students added familiarity with their foods origins. Students were asked to fill out a brief survey about their reactions to the new fish, while Chang also tabled to collect more responses for her longer sustainable seafood survey.

Finally, in May, Executive Chef Mark Thompson joined Chang on a trip to see the Red’s Best operation in Boston. “The highlight was probably seeing the incredible diversity of species they had,” Chang said. “It’s really what the fishermen are catching. Everything was also super fresh, staying less than 24 hours, so it was a ton of whole fish just on ice.”

Overall, Chang’s research has been positively received by both staff and students. “A lot of people are really excited about this project,” she told me, “so I’m surprised that nobody was already working on it. There’s generally a lack of discussion about the ocean and sustainable food generally here, though.” She’s recommended that Dining Services could purchase Red’s Best seafood through Sysco, which would allow Williams to maintain its bulk purchase discount. As the semester draws to a close, she hopes that momentum will continue and that the Williams community will continue to reorient itself toward local, sustainable seafood.

Click here to read Erica’s report (the executive summary or the full report). 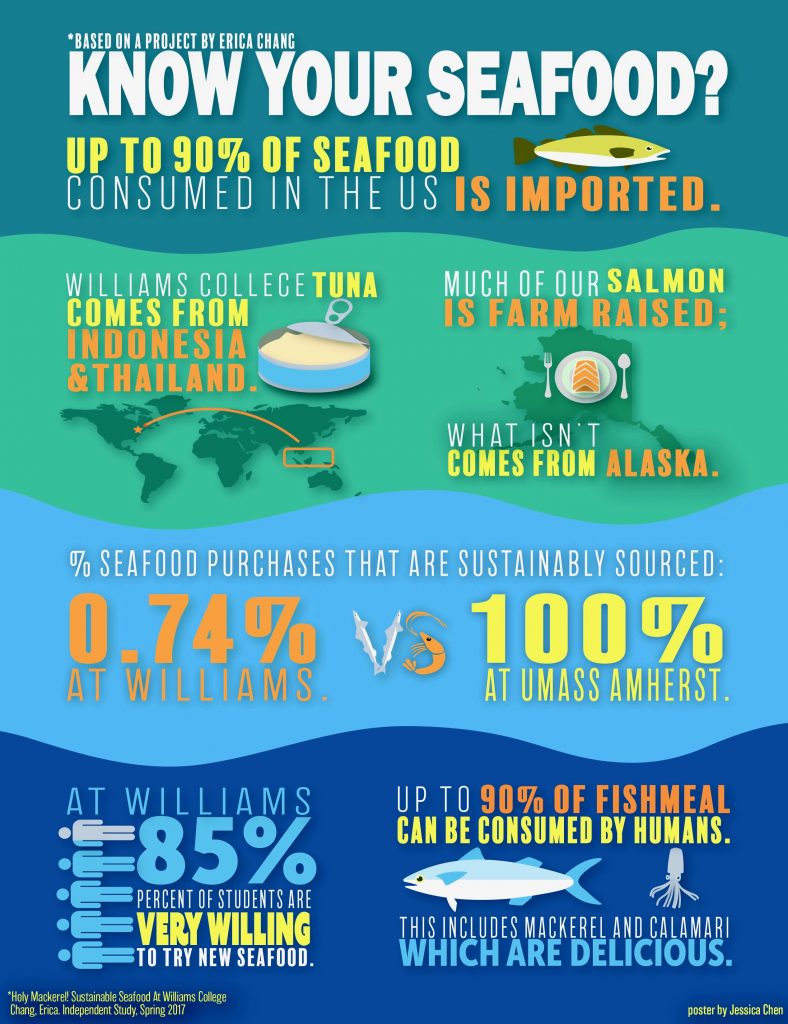