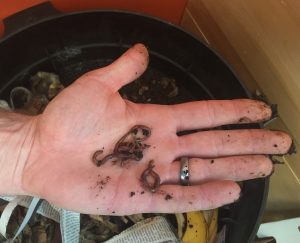 Most people feel have strong feelings about worms.  Variations on Yuck! is what I hear most from people (or get the hint from their body language) closely followed by Cool!  Then comes those who are intrigued, though still not sure, and tip-toe towards our office’s worm composting bin with their heads pulled back a bit, seemingly worried that the worms – or a nasty smell – will jump out at them.

At the end of Winter Study, Professor Hank Art and I led a vermicomposting workshop – Indoor Worm Composting 101 – in which we gave people the tools so they could build a worm bin, care for their worms, and turn food scraps into a rich natural fertilizer for their garden or indoor plants.

Vermicomposting is simply composting with worms.  Worms speed up the process by eating and breaking down the compost – in this case food scraps. They then turn what they eat into a product called worm castings, which is a highly nutrient rich substance that can be used like compost to improve and enrich soil and subsequently increase the health and productivity of plants.

I asked Don Kjelleren from Career Services what drew him to the workshop “Actually, it was an end of a wintery day invitation that smacked of spring gardening and so I took a flyer.  Knew nothing, learned much (PH levels, nitrate percentages?), and now have an adopted worm colony apparently reproducing in my basement.”  Kelly Chen ’17 had been pretty curious about how to use worms to reduce food waste and after the workshop she told me that she plans to make one for her family when she’s next at home.

As you’ll see in the photos, our indoor worm bins used shredded newspaper or wood shavings for bedding, a handful of soil or worm castings from another bin, and that was pretty much it.  Making sure the bedding is moist enough but not too wet is important, so participants added enough water so the bedding felt like a wrung out sponge.  And then they added the worms.  Voila!

Worm composting resources abound, but here is one link that we like from the Massachusetts Office from Energy and Environmental Affairs.