On May 3 and 4, the Zilkha Center cosponsored two campus events with Ahmad Jitan, the food ecosystems organizer for IMAN (the Inner-City Muslim Action Network). IMAN is a Chicago-based community organization that fosters health, wellness, and healing in the inner-city by organizing for social change, cultivating the arts, and operating a holistic health center. Jitan’s work as a community organizer (particularly in leading IMAN’s “Corner Store Campaign”) reflects the spirit of IMAN’s transformative work, at the intersections of food justice, health and wellness, and racial/economic justice. These events were organized in conjunction with Professor Zaid Adhami’s course, “Islam in the US: Race, Religion, and Politics,” for which Jitan served as a guest speaker.

The first public event, held on May 3, was a lecture titled “Corner Store Justice: Food Sovereignty and Solidarity in the Inner City,” attended by about 20 campus community members. This lecture offered the audience a vivid glimpse into the realities of food apartheid in the Englewood neighborhood of Chicago, and IMAN’s efforts at counteracting this disastrous reality. Jitan illustrated in a number of ways the systematic lack of access to healthy and nourishing food options in this neighborhood eviscerated by racialized disinvestment, red-lining, criminalization, and violent policing. “We often hear about ‘food deserts’ but I don’t like using that term,” Jitan explained. “I prefer the term ‘food apartheid.’ Deserts are naturally occurring ecosystems, and they have their own ways of sustaining life. ‘Apartheid’ highlights how the food disparities of the inner-city are man-made and occur by design.”

In one of the most evocative moments of his visit, Jitan showed us two images: the first a map of Englewood (whose population is almost entirely Black and Latino/a), and the second a map of Lakeview (a mostly white neighborhood adjacent to Englewood). Both maps highlighted the number of abandoned buildings, vacant lots, corner stores, and major food establishments, as well as the median incomes: 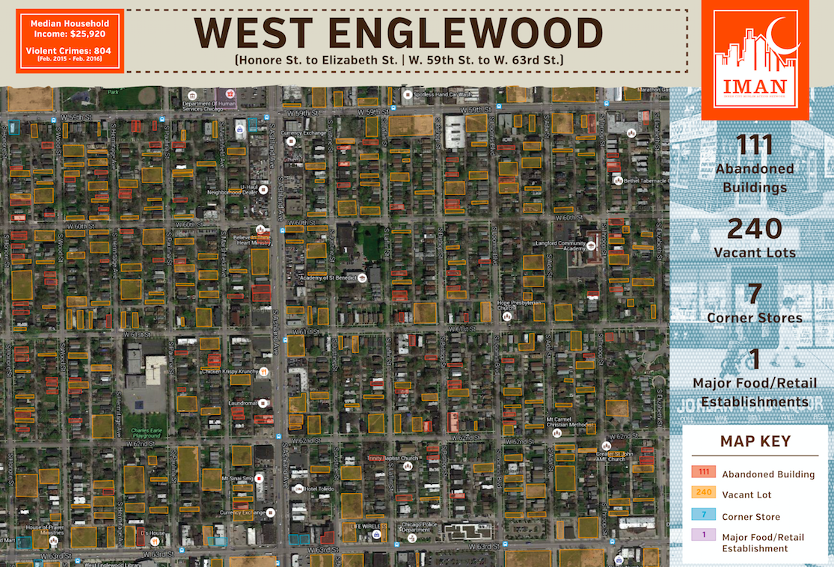 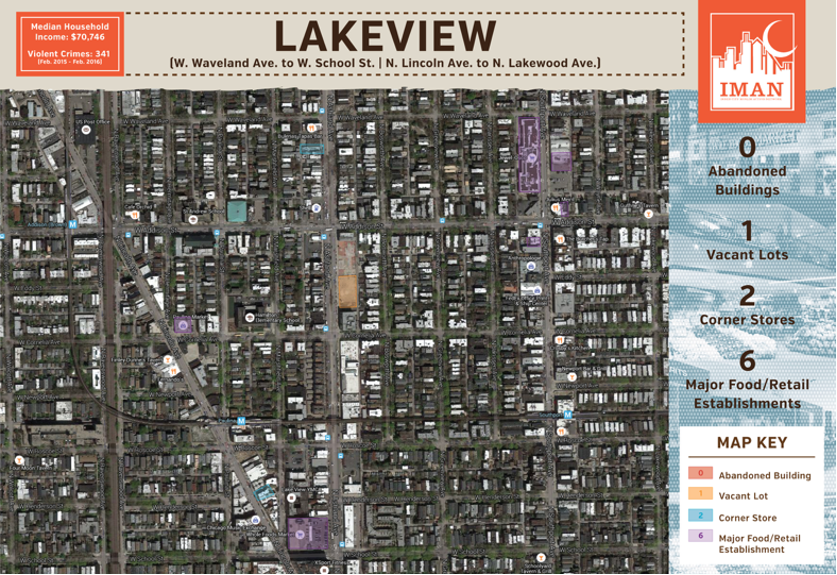 The contrast between these two neighboring areas was incredibly striking, particularly when Jitan noted that the one “major food” establishment marked in the Englewood map was actually a Walgreens pharmacy (not an actual grocery store). Jitan also noted that although there is a community garden at the center of Englewood, the produce from that garden is not consumed by the residents of this neighborhood but rather is sold elsewhere. Even more breathtaking, however, was a simple statistic illustrating the drastic consequences of these disparities. Jitan had the audience guess the life-expectancy gap between the two neighborhoods. The answer (which nobody anticipated): a staggering 30 years, as documented in this study. As Ahmad reminded the audience, food is life, and these communities are systematically deprived of real food.

This is where the Corner Store Campaign comes into the picture. Corner stores are a staple of almost all inner-city urban environments in the US, and Jitan highlighted how these corner stores are a key ingredient in the reality of food apartheid and lack of access of fresh, healthy food. The Corner Store Campaign that Jitan leads seeks to transform how these immigrant-owned stores run, through relationship building, conversation, incentives, and support. He spoke of the crucial balance between organizing for change through the ideal of solidarity and helping people recognize the commonalities of their struggles (particularly on the part of Palestinian store-owners who themselves are refugees of Israeli apartheid), while also identifying the self-interest that will motivate these changes. He also spoke of leading by example, as IMAN just opened their own fresh-food market, to show what that healthy alternative can look like and how it can be in the best interest of everyone.

Following up on this talk, the second event, held on May 4, was a more casual “fireside chat” and dinner for students, titled: “Lessons from the Trenches: community organizing, solidarity, and spirituality.” Attended by some 25 students, this event built on the previous evening’s discussion and not only talked about the importance of relationship-building, but also enacted it through intimate and vulnerable conversation.