On April 5th, the Davis Center, Zilkha Center, and Dr. Allison Guess hosted a showing of Come Hell or High Water: The Battle for Turkey Creek at Images Cinema. The event was open to both community and college members. While Dr. Guess states that she has shown the film since 2017 to her students in order to aid them in thinking through land, Blackness, Blackness in relationship to indigeneity/indigenous land, and dis/re/possession, this year the event commemorated Rev. Dr. Martin Luther King Jr’s final speech on April 3, 1968, “I’ve been to the Mountaintop.” Dr. King’s final speech, deemed as a sort of call to action, centered the ongoing racist labor injustice experienced by and through the sanitation workers’ strike in 1968. 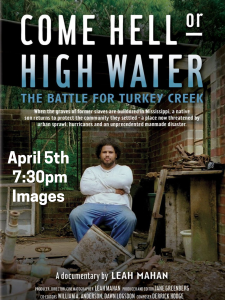 During opening remarks, Dr. Guess rightfully contextualized that MLK’s imagination of the “mountaintop” is “a Black socio-ecological vision.” Guess also highlighted that the majority-Black sanitation workers of Memphis, TN, were not just public workers, but perhaps most poignantly, in her estimation, land stewards and environmentalists. Relatedly, bringing the recent murder of Miguel Estrella into the room, Dr. Aly Corey, Associate Director for Inclusive Learning Environments at the Davis Center, drew attention to the fact that Miguel was a young gardner of color murdered by Pittsfield police on March 25, 2022. Corey outlined that policing is also an example of environmental injustice. Guess added that it is also a hazard. Scholar-practitioners have charted and mapped the overlapping geographies of environmentalism and policing, with some constituting policing and prisons as “pollutants” (see Braz and Gilmore, 2006). Thus, the murder of Estrella and the battle at Turkey Creek encouraged a reflection on how we might contribute to Dr. King’s legacy following his assassination on April 4, 1968 (54 years ago) as an unfinished struggle.

The film was followed by a panel discussion with local land stewards and land justice practitioners Tu Le, owner of 328 North, Sunder Ashni, worker-owner of Mumbet’s Freedom Farm, and Solomon Titus Taylor descendant of Ishmael Titus, and Andrew Art, who are working to recover Taylor’s erased family history in the Berkshires.

The event focused on the theme of dispossession as an environmental issue fortified through racial capitalist development, settler toxicity, and relentless encroachments. Each panelist shared about their own journey and relationship to stolen Mohican land and their relationships and histories of their ancestral homelands near and far. The panelists also spoke about what it means to be racialized people living in the Berkshires–a place often thought of as stolen, isolating, and quite hazardous for people of color. Stories of refuge, respite, resistance, and regeneration abounded. Through the remembrance of whose land we currently occupy (the Stockbridge Munsee Band of Mohican Indians’ stolen land), alongside historic Black residents–Ishmael Titus of the White Oaks community and Elizabeth “Mumbet” Freeman–a collective sense of reclaiming of the Berkshires as a storied and layered place where the repossession of a “mountaintop vision” grounded in revolutionary POC-led environmental justice could take shape. We are deeply appreciative of the work of Leah Mahan–Filmmaker and Director of Come Hell or High Water, those around the planet, and those local to this area who labor to make this Earth truly a sanctuary for everyone.

The highlight of the event came when Derrick Evans, the activist-protagonist of the film and champion for Turkey Creek, surprised us all by arriving during the Q&A! He shared his philosophy of activism and the current projects that he is pursuing in Turkey Creek. CD, a student in Dr. Guess’ “Race, Land, and Dis/Re/Possession: Ongoing Topics in Environmental In/justices and Subaltern Geographies,” class spoke with Derrick after the film and shared,

“…​​it was a jaw-dropping surprise to have Derrick appear in the theater as he did. Even though it was his film’s […showing…], he expressed a deep interest in Williamstown’s history regarding the Titus family. I was able to share some of my own history with Derrick regarding the land given to my ancestors in North Carolina that many of my relatives still occupy today, and he shared some insights into how I should further navigate and uncover the history between my family and the land. He stressed the importance of the oftentimes ‘lost’ familial histories that have come to shape many African American existences today and the reality that such repossession of narrative is not an easy task, but one that requires stout fortitude regarding one’s mental, physical, and spiritual stamina.”

Moreover, JD, another student in Dr. Guess’ class later wrote to Dr. Guess in an email stating, “I would also like to thank you for organizing the film screening, it was a great event. The panelists were engaging and the visit by Derrick was a really fun surprise.” Students left the theater with smiles on their faces, repeating “thank you so much” and “nice to meet you, Derrick.” What a joy and treat that we could all be together in this way.

We are so thankful to have learned from Derrick, both from the film and his presence in Williamstown!

Please visit the Covid-19 website for the latest information, including details about vaccination, testing and mask requirements, and policies for off-campus visitors.