Haley Bosse ’20’s focus on post-consumer food waste as an Eco-Advisor has inspired her to initiate several projects that reduce waste through behavioral change. She recently restarted the Zilkha Center’s Compost Greeters program, which she has rebranded as Compost Friends. Greeters first helped students navigate food disposal at all three dining halls at the beginning of the fall semester. Posted at each clearing stations, they wore T-shirts to distinguish themselves and helped their peers separate compostable waste from non-compostable waste. 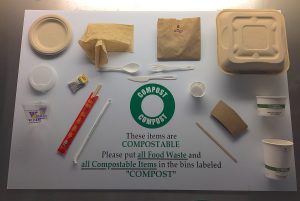 The most familiar method of compost education is the dining hall signage, which was originally created and recently updated by Mike Noyes in Facilities. While these clear and accessible instructions are crucial, a successful composting campaign also calls for the in-person instruction that Compost Friends provides.

Bosse decided to bring back the greeters for Winter Study to remind students about waste disposal as they returned from break. “Waste disposal just becomes routinized for people,” she says. “They think they know what to do, so they don’t bother looking at the signs anymore. Our job is to snap them out of it!”

The program is effective, Bosse says, because it relies on peer interaction, not the top-down imposition of rules. To effectively educate others, greeters are supposed to be open and welcoming, not critical. Though the greeters’ presence confused some students at first, Bosse thinks the program effectively “snapped people out of their routines” and helped them develop better composting habits. She hopes to bring Compost Friends back to the dining halls sometime in the spring semester.

Another of Bosse’s goals is to reduce the use of disposal coffee cups on campus. Last semester, she collaborated with Mission Dining staff to move the disposable cups from their usual location by the coffee machines to the marche station behind the salad bar. A sign tells patrons where they can find the cups, but since the marche station is more out of the way, Mission has seen the use of disposable cups decline drastically.

Surprisingly, Bosse says that Mission staff hasn’t heard much backlash about the change. This bodes well for her goal to reduce disposable cup use in other dining halls, though Whitman’s and Driscoll pose specific challenges. Since both are much smaller than Mission, they have less flexibility to rearrange stations. Whitman’s location also makes students more likely to stop there for a hot drink on the go, which might make cup reduction even trickier.

Bosse emphasizes that all of her projects require working closely with Dining Services and appealing to their goals. Waste reduction can’t compromise their need to feed students, so any proposal requires careful thought about how a change will affect daily operation. You can’t just take something away, Bosse says: You have to either replace it with something else or change peoples’ habits so that it becomes obsolete.

Water Update: Class of 1966 Envi Center
An Introduction to TAM’s Waste Management through the eyes of Sumun Iyer ’18
Sustainability MENU