“Climate Justice Under Trump,” a workshop hosted by Divest Williams on January 24th, represents a deliberate effort by the student organization to demonstrate and enact its commitment to environmentalism as an intersectional justice issue. Divest presented the workshop as part of College Council’s new free university workshop program over Winter Study, a series that encouraged student groups to host workshops for the general campus community. Freshmen Adrienne Banks ’20 and Hannah Goldstein ’20 spearheaded the workshop, working with other Divest members to organize the event within the first one hundred hours of the Trump presidency.

Eliza Klein ’19, an active member of Divest, explained how the workshop introduced participants to the intersectional realities of climate change and environmental justice in the U.S. “Environmentalism isn’t just about saving the polar bears or encouraging white people to recycle,” she said. The workshop presented participants with four concrete scenarios that illustrate how systems of racial and economic injustice compound environmental degradation and leave certain populations more vulnerable than others. For example, Klein explained, incarcerated people in California are sent to fight the state’s wildfires, which have worsened in recent years due to climate change. Hurricane Katrina had the most devastating consequences for the black residents of New Orleans, many of whom never received adequate government aid. Mold in public housing [link to research by Divest member Liliana Bierer ’19!] endangers the lives and health of residents, while the fight against the Dakota Access Pipeline in North Dakota has become a symbol of indigenous resistance to colonialism. Populations like these are on the front lines of environmental injustice, Klein said, and Divest believes that it’s crucial to listen to them and center their perspectives. At Williams, she said, we need to enact solidarity.

Klein and organizer Adrienne Banks emphasized that Williams students who care about environmental issues shouldn’t only focus on campus projects like expanding composting or pushing the college to rely on green energy. Because of their school’s financial and political clout, they said, students should seize the opportunity to build and leverage student power: Williams students are in a position to challenge exploitative corporate systems. The college’s self-definition as a progressive institution devoted to the common good mustn’t be a mere facade, they said. Though Williams makes efforts to benefit off-campus communities through initiatives like its local carbon offset problem, Klein and Banks said that funneling the bulk of financial resources into visible, on-campus projects doesn’t do enough to fight for the rights of the most vulnerable.

Klein and Banks also cited Divest’s mission to support student power more broadly. They expressed solidarity with other campus issues like the fight for increased mental health resources and the need for more faculty of color. “Divestment politicizes students,” Klein said, “but divestment from fossil fuels absolutely isn’t our only end goal. We want to challenge Williams’s understanding of itself and push this place to do more. And we want to build community and take care of each other.” 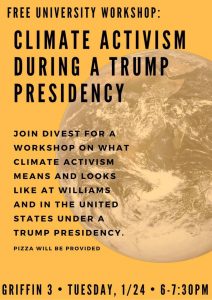 Under President Trump, Banks said, everything becomes much more urgent. The government won’t be taking any steps toward environmental justice, so we need to ask ourselves: What is the role of private institutions? Williams’s wealth and prestige are predicated upon centuries of reliance on exploitative systems and there’s no such thing as neutrality, she said. To remain silent is to err on the side of Trump and the fossil fuel industry. The institution has a responsibility to wield its influence and actively combat climate change.

About fifty students came to Divest’s January workshop, which Banks and Klein deemed a success. That turnout included freshmen and other students who hadn’t studied environmental justice issues beforehand; the workshop’s format allowed students to participate without any prior knowledge. “Our goal was to reframe environmentalism,” Banks said, “and we got there – as much as you can in an hour, anyway.”