How can we reduce our energy consumption? Professor Jeannie Albrecht has a powerful theory: we must understand our energy usage before we can change it.

In this vein, this summer we have been working with Professor Albrecht to develop, fine tune, and compare ambient visualizations of real-time energy and power usage of the appliances in the Environmental Center’s kitchen. Each visualization uses a combination of color, size, motion, and number to represent the Power (the rate of energy use) and Energy (cumulative energy use) of each appliance.

Developing tools to demystify energy usage is especially critical for the Environmental Center, which strives to qualify as a “Living Building.” The Living Building title is bestowed upon buildings that use net-zero or net-positive energy over the course of one year and make efficient use of resources. As students, faculty, and staff all share the building’s downstairs kitchen, it is critical that the building has a comprehensive, real-time means to communicate how energy is being used so that the many chefs who move in and out of the space can align their cooking behaviors with the building’s larger mission.

The course of our research has involved adapting the work of previous research assistants to be compatible with the Environmental Center’s kitchen and the needs and habits of its occupants. After fine-tuning three visualizations involving various colorful shapes (hexagons, circles, and pinwheels), and creating a new visualization depicting running water to represent energy usage, we turned to the kitchen to begin our experiment. 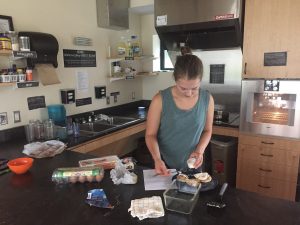 Using a small sample of Williams students, we instructed participants to cook a simple breakfast in the kitchen while an energy use visualization was displayed on a screen. Each visualization was rotated through the experiment an equal number of times, allowing us to collect data to compare their effectiveness. We were interested in the aesthetic appeal and intuitive usability of each visualization, as well as its ability to convey to participants the power and energy use levels of each appliance without using concrete numbers.

To accompany our results from in-kitchen experiments, we used Amazon’s Mechanical Turk platform to gather a larger pool of data. Mechanical Turk is essentially a collection of thousands of remote workers who you can pay to do an online experiment, take a survey, etc. Since we couldn’t monitor the Mechanical Turk employees in an actual kitchen, we were tasked with creating a virtual simulation that would provide an accurate, though abbreviated, picture of the visualizations’ functionality in a kitchen setting. After numerous trials and recalibrations, we succeeded in creating a simulation that would prompt users to interact with a virtual kitchen as they were led through a cooking storyline. The simulation is then followed by a survey, similar to the one given to student participants, asking the Mechanical Turk workers to judge the visualization in terms of intuitiveness and aesthetic appeal. From this survey, we will be able to back our relatively small pool of in-kitchen results with statistically significant quantities of online results.

Our hope is that one, or all, of these ambient visualizations, will soon be permanently displayed in the Environmental Center’s kitchen to increase everyone’s awareness of their power and energy usage, and even work toward positively changing behaviors to conserve energy.

If you want to learn more about how a visualization can display energy usage, check out our aforementioned online kitchen simulator

Thank you to Grace Murray ’20, Casey Pelz ’19, and Abigail Miller ’19 for sharing what you are working on!