For the past several years now, Associate Provost Chris Winters has offered an instructional fruit-tree pruning workshop in the early days of spring. This year, we gathered outside the Envi Center mini-orchard on March 3 to learn about the art, science and practical necessity of pruning. The initiates were a small mixed group of students, staff and professors.

Winter and early spring are the proper times for pruning because trees are dormant during this period, and can better handle the exposure of their cut branches. March 3 also happened to be a bright, sunny day, so it was pleasant to spend a few hours in the open air. 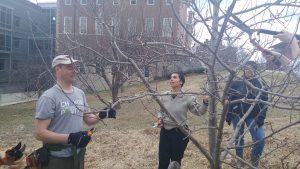 Why do we prune? Pruning is important for the health of fruit trees, as it supports resistance to disease, and it also makes them more productive and easily managed. Chris noted that most people prune infrequently and sparingly, which damages the health of their trees over the long term. He also stressed the importance of having sharp tools for the task and showed us how he sharpens his pruners and loppers to a crisp, gleaming edge. Before we honed in on our first tree, Chris provided some fascinating information on the science of tree grafting, the creation of new cultivars, and differences between seedlings and dwarf rootstocks.

The Envi Center mini-orchard contains pear trees, peach trees and several species of apple trees. The presence of both stone fruits and seed fruits allowed Chris to demonstrate the two styles of pruning. Starting with the peach tree, Chris showed us how to prune the branches into the “Open Center” shape that is ideal for stone fruit trees. Here the reddish branches of the peach tree are tailored into a vase shape, allowing light and air to be funneled towards the tree’s center.

Walking over to a neighboring apple tree, Chris illustrated the “Central Leader” method that is used for pruning seed-fruit trees. Here the pruner encourages “scaffolds,” or sturdy weight-bearing branches to grow out of a tree’s central leader, or trunk. It is important to train the branches to come out of the central leader at proper angles, and Chris showed us how he makes branch spreaders with the popsicle sticks that he carries among the shears and saws in his tool belt. It was engrossing to watch Chris, the seasoned pruner, perform a quick visual analysis of a group of branches–and then clip a few of them to select for optimal future growth. As he pointed out, you can see where last year’s growth turns into this year’s growth from the different segments of the branches.

After watching Chris prune, and absorbing his wisdom, we tried our own hand at the task. We clipped off dead and diseased branches, wayward branches tilting back towards the central leader, water sprouts heading straight up, and branches that otherwise conflicted with the desired tree structure. We trainees were not quite as swift and decisive as Chris as we posed our shears for each cut, but we all learned a lot and have hereby begun our journeys towards pruning excellence.

Baladine Pierce ’20 is a Gardening and Landscaping Intern for the 2019-2020 academic year from New York, New York.