As part of her coursework for Professor Joel Lee’s anthropology class titled “Trash,” Sumun Iyer ’18 delved deep into fieldwork that a more squeamish student might have avoided: She (literally) got her hands dirty in the world of trash and recycling collection. To conduct ethnographic research about how workers relate to their work and materials, Iyer tried her hand at sorting recyclables on the line and accompanied a collection driver on his morning rounds.

TAM Waste Management operates several facilities in southern Vermont, though its reach extends into the Berkshires and eastern New York. Williams College’s compost goes to their organics facility in Bennington, the company operates its main transfer station in Shaftsbury, and Pownal is home to the recycling facility that Iyer visited, which also serves Williams and other residents of Northern Berkshire County. It’s a fairly small company with an informal work environment, so they allowed Iyer to get up close and personal with waste management.

TAM sorts recyclables at its Pownal location three times a week. Recyclables need to be sorted because TAM operates a single stream recycling program for their residential pickup, which means that cans, bottles, plastics, cardboard, and paper arrive all mixed together. This hodgepodge of materials is emptied onto a conveyer belt and each worker on the line is responsible for collecting a specific material and putting it in the appropriate bin.

Working on the sorting line can be dangerous, Iyer said. Falling materials could injure a worker’s eyes and hazardous materials sometimes ends up on the line, including needles and live animals. Other materials are less of a danger and more of an annoyance: In any given day, workers might find anything from food waste to vacuum cleaners mixed in with the recyclables. Workers sometimes find interesting oddities like old license plates, which they display at the facility.

After helping on the sorting line twice, Iyer was able to shadow a collection driver on his route. They left early in the morning to collect trash and recycling from homes and several businesses as part of TAM’s curbside service. A driver’s job is a more appealing career for many than line sorting, Iyer said: It pays better, requires more specific skills (a commercial driver’s license, for instance), and gives a worker more control over their routine.

On the other hand, driving is less anonymous than line sorting. The specific driver whom Iyer shadowed, however, grew up in the area and knew many people on his route, which surprised Iyer, given the ethnographic work she’d studied about collection in larger, more anonymous cities. The driver said hi to people, Iyer said, and someone even gave him candy. A greater sense of community might lead to a greater sense of responsibility, Iyer suggested: You’re likely a better trash producer if you know the people who interact with your trash. That’s not to say that driving doesn’t present its challenges, though. Like workers on the line, drivers risk handling dangerous materials; at one stop, Iyer and the driver found de-icing fluid in the trash. You just never know what’s in a bag. 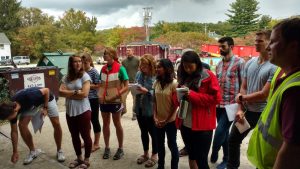 Ultimately, working in waste management either on the line or as a driver requires quick thinking and pragmatism, Iyer said. Many workers approach it with a “it’s a tough job but someone has to do it” attitude, she noted, and emphasized that you learn a lot along the way: “Out of nowhere, you could have a trash compressor spraying at you,” she said, “and you probably won’t know exactly how to deal with something like that until it happens!” That said, Iyer emphasized that TAM takes a great deal of care in training its employees, and overall, all these dangers are preventable with the cooperation of trash producers.

In closing, Iyer said: “Trash is a weirdly intimate portrait of a person. It reveals a lot about someone’s routine: If you know what’s in someone’s recycling, for example, you know exactly how much they drink.” Though many people prefer not to think about their trash, its contents narrate our habits and values. And the people who work in waste management are intimately familiar with the part of an object’s lifecycle that much of consumer society would rather not engage.