Solar panels, also known as photovoltaics (PV) are made of at least two layers of semi-conductor materials. One layer has a positive charge, and the other has a negative charge. When light hits the top semi-conductor layer, a portion of the energy is absorbed, freeing electrons from the negative layer to flow through an external circuit and back in to the positive layer. This flow of electrons creates electric current. Individual solar panels can be connected to increase the power output, creating a solar array.

Solar thermal systems convert sunlight to heat that can be used for space heating, space cooling, and domestic hot water.  The core of these systems is the solar collectors. There are several different kinds of solar collectors, the most common of which are flat plate and evacuated tube. Solar collectors convert the sun's energy most efficiently when the sun’s rays hit them at a ninety degree angle. In the United States, the sun is always in the southern part of the sky and is higher in the summer and lower in the winter. That means that solar collectors are most effective when they’re installed facing south and tilted towards the south. The degree of the tilt determines what part of the year the solar panels are optimized for: the greater the slant, the more the panels are optimized for production during the fall, spring, and winter when the sun is low in the sky.

Biomass is any biological material used as fuel. Biomass can be burned directly or be first converted to a different form of fuel. The carbon implications and other environmental issues related to the use of biomass depend greatly on the fuel stock used and the method of utilization. Fuel stocks that require little in the way of energy or nutrient inputs and which require minimal processing generally have lower emissions and environmental impacts.

Geothermal heat pumps take advantage of the relatively constant temperature of the earth a few feet below the surface and use it as a medium for heat exchange. Geothermal heat pumps can both heat and cool. They typically function by running a fluid through pipes set in the ground. During the summer, the fluid loses heat to the earth, returns to a heat pump which draws heat from the building and gives it to the fluid, which in turn loses that heat to the earth, yielding a net cooling. In the winter, the loop works in reverse. The fluid runs through the heat pump which removes heat from the fluid and releases it in to the building. The fluid then circulates through the pipes and gains heat from the earth.The main energy cost of a geothermal heat pump is electricity to circulate the fluid and run the heat exchanger. 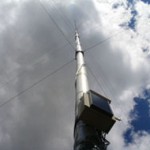 Power output of a wind turbine rises as the cube of wind speed. Wind turbines operate within a narrow range of wind speeds - if the wind is too slow, the turbine won't turn, and if it's too fast, the turbine will shed the wind rather than risk damage to the turbine. Wind speeds of over 6.5 meters per second are typically necessary for economic wind energy generation.
END_OF_DOCUMENT_TOKEN_TO_BE_REPLACED
Sustainability MENU